The difference between NPT and BSP seals

Thread: noun. a helical ridge on the outside of a screw, bolt, etc. or on the inside of a cylindrical hole, to allow two parts to be screwed together. Pipe threads are either straight (parallel) or tapered, while both options have a couple of design options themselves – threads may be according to national piping standard or british standard; be right-handed (RH) or left-handed (LH). Neither NPT, nor BSP is superior to the other one and the selection is driven by a number of factors, including geographical location, equipment size and industry. Pressure systems on board of ships use BSPP adapters, while Oil & Gas industry prefers NPT fittings; while NPT threads are common in the North and South America, BSP threads are widely used in most European, Asian, African countries and Australia.

In certain applications involving high pressures, usage of threaded joints may be totally unfavourable. That’s why use of screwed piping joints, especially on new installations is becoming increasingly uncommon.

Most threads are based on trade size (which is approximately equal to the thread’s major diameter), rather than actual diameter, which can lead to some confusion when measuring ports. For example, 1″ NPT pipe thread has an outside diameter (OD) of 1.315″. On the contrary, in the modern version of standards for metric pipe thread, nominal size is simply a size number, where listed diameter size is the major outer diameter of the external thread.


Straight (parallel) threads are meant only to mechanically join parts and to hold a fitting in place. That’s why some type of seal, either an O-ring (elastomer), hard metal or a soft seat seal is required. Straight pipe threads include NPSM (National Pipe Straight Mechanical),NPSH (National Pipe Straight Hose) and BSPP (British Standard Pipe Parallel). Frequent applications of NPSH and NPSM thread we can see in our daily lives are the garden hose (GHT) and fire hose (NST). Tapered threads have a slight taper. When mated together and tightened, the threads compress and form a seal, however usually a thread sealant is required, as sealing on a threaded joint only takes place on two to three threads within the joint once fully tightened. For a leak-free seal, we recommend using a sealant compound (Permabond A131, ROCOL Oilseal, ROCOL Foliac Manganese, Loctite 572, Loctite 577, Loctite 270, Swagelok SWAK, Furmanite FCE, etc.) or Polytetrafluoroethylene (PTFE) tape, which will assist by filling any surface imperfections such as scratches on the threaded faces. Another option may be a seal weld, but obviously, it may not be considered if the joint may require to be undone.

NPTF (Dryseal) threads are modified NPT threads, which are less likely to leak without a sealant. You can use NPTF threads with NPT threads, but you’ll lose some of the leak-free characteristics.

They seal due to the “out of roundness principle” which means that the male stretches the female fitting until there is so much force that the connection can hold pressure. One of the challenges with this design is that if you connect stainless steel to stainless steel then over-tightening or poor lubrication can cause gauling / galling (a form of wear caused by adhesion between sliding surfaces) and damage to the threads. Sometimes MPT and FPT are used in the literature instead of MNPT and FNPT, respectively.

From historical point of view, in 1864, William Sellers, being the president of Franklin Institute, presented a standard for nuts, bolts and screws, which became the National Pipe Tapered (NPT) thread.


Pipe thread sizes are standard and for any NPT pipe, NPT thread dimensions can be found using the table below. 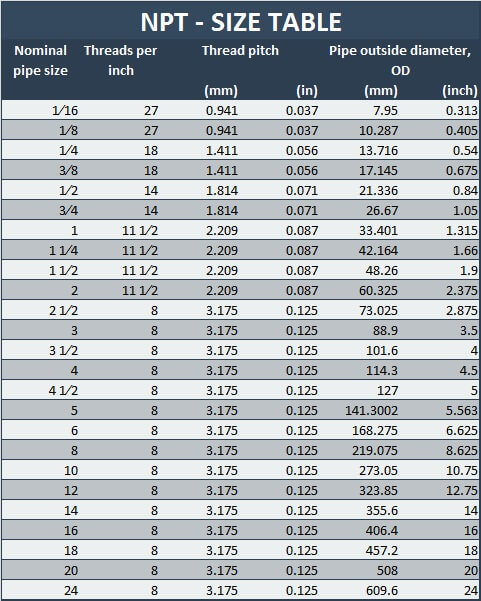 These values are for reference, for more detailed information please refer to the relevant standard. NPT, NPSC, NPTR, NPSM and NPSL are covered under ASME B1.20.1.

BSP is divided into two types

BSPT is very similar to NPT fitting with slight difference on the included angle (60 vs 55 in the case of NPT), while BSPP employs parallel threads and provides a seal via a bonded seal ring, which is sandwiched in-between a shoulder on the male fitting and the face of the female fitting and is squeezed in place. BSPP pressure gauges have a longer male thread and use a copper crush washer that is squeezed in between the bottom of the male fitting and the bottom of the female BSPP hole forming a pressure tight seal.


Just like in the case of NPT connection, there is a table you can use for BSPP and BSPT thread. These values are for reference, for more detailed information please refer to the relevant standard:

Difference between NPT and BSP


There are a number of differences:

Because of aforementioned differences, mostly it is not recommended to substitute BSPT and BSPP threads for NPT threads, with a couple of minor exceptions:

So, unless you are working with low pressures and are totally out of options, it is not advisable to use NPT with BSP. Results may be devastating! Most probably, it won’t go any further than 2-3 turns, a slack fitter will say it’s good enough and leave it. Please bear in mind that only 1 thread will be sealing the pressure off and the “unexpected” will happen sooner rather than later, if pressures are sufficiently high. Although it is one of the most frequent thread mismatches, it does not mean that it’s safe to do so!

Pressure systems in the process industry use different ways of sealing depending on the geographical region, size of the pressure system and the environment. There are regional differences in sealing types as well as industry preferences. For example, many pressure systems onboard ships use BSPP adapters while many applications in the oil and gas industry use NPT fittings. While one sealing style is not inherently better than another each style has its application.


NPT (National Pipe Thread) seals are the most popular type of seal for pressure calibration systems in the U.S. and Canada. NPT male adapters have a taper thread that wedges into the female NPT adapter. They seal due to the “out of roundness principle” which means that the male stretches the female fitting until there is so much force that the connection can hold pressure. One of the challenges with this design is that if you connect stainless steel to stainless steel then over-tightening or poor lubrication can cause gauling and damage to the threads. Thread sealant is needed to seal but only 2 turns of thread sealant is required. Any more than that and the seal can leak around the thread sealant.


BSPT (British Standard Pipe Thread) is similar to NPT except for one important difference. The angle across the flanks of threads (if you sliced the fitting in half long-ways and measured the angle from root to crest to root) is 55 degrees instead of 60 degrees as it is for NPT. Thus an NPT male will fit into a BSPT fitting or vice versa but they will not seal. This is a popular fitting in China and Japan but is very rarely used in North America unless the equipment to which it is attached was imported. Thread sealant is needed to seal the male and female fitting together. Ralston Instruments has adapters to both male BSPT adapters and female BSPT adapters.


BSPP (British Standard Parallel Pipe) is most popular in the UK, Europe, Asia, Australia, New Zealand and South Africa. It is a parallel thread fitting that uses a bonded seal ring to do the sealing. This bonded ring seal is sandwiched in-between a shoulder on the male fitting and the face of the female fitting and is squeezed in place. BSPP pressure gauges have a longer male thread and use a copper crush washer that is squeezed in between the bottom of the male fitting and the bottom of the female BSPP hole forming a pressure tight seal. No thread sealant is needed to form a seal.