Air Release Valves are essential pipe valves. No pipeline design can be completed without the use of Air Release Valves. The basic function of air release valve is to release air pockets. Air pockets collect at each high point of a full pressured pipeline. These buildups cause flow capacities to be reduced by 5-15% of designed flow. These reduced capacities are usually not noticed because air is invisible culprit.

These accumulation of air pockets increase energy consumption. This is because pumping operation will be at higher heads to overcome air constricted flow. The use of air release valves open against internal pressure. The internal lever mechanism multiplies the float force which is greater than the internal pressure. This force helps in opening the orifice whenever air pockets collect in the valve. For pipeline efficiency and water hammer protection, air release valves are thus very essential.

How does an Air Release Valve works?
An air release valve is a normally-open valve. This valve will remain open till your system is pressurized. Air is already present. As pressure increases within the system, unwanted air reaches the highest point in the system. When pressure inside the system exceeds the regular atmospheric pressure, air is expelled. As the flow rises, the poppet becomes buoyant and eventually closes. When pressure and liquid level drop, the air release valve will automatically re-open.

How to install an Air Release Valve? 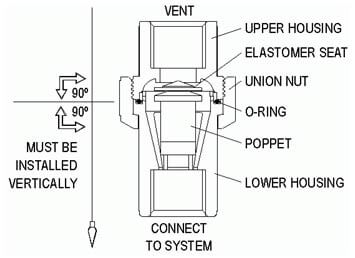 An air release valve should be installed at the highest possible point in a piping system. It must be oriented upright. In some cases, residual liquid/ air in the valve is expelled from the outlet port just prior to valve shut-off. Therefore, it is suggested to pipe the outlet port to a safe area for hazardous liquids, or rather use a standpipe for non-hazardous liquids.